For 20 minutes, I’ve been trying to explain to Gene Lewis why I want to write a story on him, but the 80-year-old isn’t budging. He continually lifts his glasses to rub his eyes. The thought of being portrayed in a sports magazine doesn’t faze him. There’s a past in his face. There’s a past in his eyes. Five lifetimes in those eyes; a world weariness fit for a blues song.

In desperation I pulled out a memo that i faxed to my editor. He wanted five story ideas on boxing, the first one reads: Gene Lewis – a mainstay in Arizona boxing for 50 years. Who knows how many lives this guy has saved from the horrors of the ghetto?

Lewis puts his glasses back on and scrutinizes the memo. He focuses his gaze back on me and our eyes meet once again. He smiles.

“OK, so you do know what I’m all about. What is it that you want to know?”

“Success stories,” he says aloud repeating me. He scratches his chin. I got a lot more failure stories. Got plenty of those,” his voice trails off.

In the neighborhood, he’s lovingly referred to as Old-School Pops. Salt of the earth. The kind of man who got up every day of his life at the crack of daylight and worked until sundown, raised a slew of kids and put them all through college from his hard labor and sweat. No vacations, no sick days, never a day of work missed. Justice in his household was swift, harsh, and never questioned. Everything was “Yes, sir” or “No, sir.” Old-School Pops.

Gene Lewis has been Arizona’s patron saint of amateur boxing for more than 50 years. He wakes every day at 4 a.m.. As he can make it to his job as a custodian for the City of Mesa at 5 a.m. sharp. During the day he mops floors, scrubs toilets, and cleans buildings for eight hours straight. By 2 p.m., takes of his light blue City of Mesa shirt and makes his way to the Broadway Recreation Center, once known as the old Jackrabbit Gym, or Broadway Road. 5-7 p.m. Every Monday through Friday, you’ll find Gene Lewis in the back room of this facility, sitting behind his cluttered desk, greeting the youngsters who have paid their $14 annual dues to come into the gym to learn how to box – life lessons included. Every black kid in America wanted to be “The Brown Bomber.” but Gene Lewis took it a little further than most kids – he taught himself how to box.

The first kind of any formal training Lewis received was when he was drafted into the Army in 1945 and boxed on their team. After serving two years, he returned to Mesa and turned pro in 1947, fighting at the welterweight division (147 pounds). Lewis worked odd jobs during the day, pouring cement, pumping gas and tinkering with cars. On weekends he fought at the old Madison Square Garden on Van Buren Street in Central Phoenix for $25 a bout. The bumps and the bruises took their toll after three years in the ring, and Lewis retired in 1948 with 50 professional fights under his belt, suffering only 10 defeats.

“Back when I was growing up, you had to prove yourself,” Lewis reminisces. “A guy had to fight 50 to 60 times before he got a shot at the title. Nowadays, these kids get 15 fights, and they’re ready for the world title. It’s all about money.”

When Lewis hung up his gloves, he toiled away his time doing odd jobs. His spirits flagged.

I remember Gene used to pump gas at the old Peterson 76 Station in Mesa, recalls Mesa Mayor Wayne Brown. He was always working hard at something.

Lewis’ trainer, the late Johnny Hart, suggested to his newly retired fighter that he should give something back to the community. That was where Lewis found his true calling in life: teaching young kids the sweet science. Gene Lewis has been called “coach” ever since.

The Teacher & His Pupil

The number of kids that pass through Lewis’ door has decreased over the years. Changing demographics and lure of basketball, liquor, drugs, and street life have drawn kids away from the boxing club, which at one time sported two amateur teams. They count their blessings now if they can field one.

For some kids, boxing is a last-ditch effort to go straight. Lewis’ assistant coach, Joe Hernandez, has seen a log of kids pass through the doors in his for years at the gym.

“Kids come here to listen,” Hernandez says. “They may not listen to their teachers in the classroom or at home to their parents, but they listen here. Gene has an unspoken discipline. Gene doesn’t teach about boxing – he teaches about life.”

many at the gym recall; the day when a street thug entered the gym wearing the customary gang apparel: baggy pants, boxer shorts sticking out and a bandanna drapped around his forehead. “I want to learn how to fight,” the street tough said to the old taskmaster.

“Not with them baggy pants on you ain’t,” Lewis reprimanded. “Your underwear’s showing, too, boy. Didn’t your mamma teach you no better than to have your drawers showing?” The young man returned to the gym the next day in more appropriate attire.

Only one-third of the young fighters continue boxing after six months. The others fall by the wayside. Some like Charles Smith, make it all the way to the top only to fall prey to the temptation of street life.

Charles “Tombstone” Smith trained with Gene Lewis from the age of 13 until he was 25. Every day for five years Lewis picked up Smith at the Arizona Boys Ranch near Williams Field Air Force Base and drove him 20 miles to the gym. Over the years, Smith grew into a strapping 6-foot-5, 210-pound frame and cruised through Golden Gloves and state titles as an amateur. He became Mike Tyson’s sparring partner in 1986 and was on the fast track to become a nationally ranked heavyweight contender. All the years of hard work finally paid off.

“I have no doubt he would have been the heavyweight champion one day,” Lewis says. “He would have easily been a millionaire.”

A year later, Smith was back home in Phoenix during a break in Tyson’s training camp. He started drinking. Tyson called him a few times to come back and train, but by then it was too late. Smith started running with the wrong crowd, partying nightly and falling out of shape. A few months later, a man murdered him in South Phoenix with a single shotgun blast to the mid-section.

“It was like my own child was killed,” said Lewis, rubbing his eyes with both fists, fighting back the tears. “You never get over something like that.” Charles Smith, there is the hope of one being changed by Gene Lewis’ presence the gym. Lewis has produced six national champions. He worked with former WBC Featherweight Bobby Chacon; Chuck Walker, a member of the highly-regarded 1076 Olympic Team; and served as one of the coaches for the 1975 Pan-American Games Team. But what is it about teaching these kids that keeps Lewis coming back after 50 years?

“Oh, I’ve got a kid in here who can’t chew bubble gum and walk at the same time,” Lewis says. “In these last couple of weeks I’ve noticed improvement. If he keeps coming here, he’s gonna be OK.”

“One of these days,” Lewis draws a breath and feigns fatigue, “I’m gonna quit.”

Hernandez scoffs at the notion of Lewis quiting. “Gene’s going to do this till the day he dies. Coaching these kids is an addiction. You just keep coming back.”

Sometimes the door of the gym is like a revolving door of a hotel. Many times his kids will quit, only to come back later. One kid, Hernandez recalls, got addicted to methamphetamine, left the program and dropped out of sight for a year. The young boxer knew what he had to do in order to get out of his rut: go back to the boxing program.

“Gene never judges them and never makes it hard for them to come back,” Hernandez says. “His door is always open to these kids.”

Joshua Benjamin, a black, movie-star handsome 29-year-old college educated professional prospect, is currently Lewis’ prized pupil and unofficial leader of the gym floor. Benjamin, no stranger to professional trainers, assessed of Lewis, “Gene’s a very laissez-faire type of trainer. He’s not naturing, but he’s very caring. You have to prove yourself to Gene that you’re going to be dedicated, but he’s there for you day in and day out. He can take a guy off the street with no coordination and give him ability.”

Lewis acknowledges he can teach a kid the proper tools and mechanics, but the rest is up to the individual. “You’ve got to set your mind on what you want to do, I tell everyone in the gym. ‘Make up your mind. Whatever you do, be the best at it. You wanna smoke dope? Be the best at it. Hey, lay down the gutter and roll around in the sewer water and kick those legs up in the air. If you wanna be a great boxer, stay in the gym.’ It don’t matter what color they are if a kid has championship qualities, I’ll take him on.”

It is said that a man shouldn’t be judged by his successes or failures, but by how he is seen by his peers. In 1991, Lewis was voted Mesa Man of the year for his commitment to youth. The only criterion is that the previous winners get together and vote for the person they think is worthy of the award.

“In my four years with Gene, he has taught me that you’ve got to give back to the community – somethings until it hurts,” Hernandez says.

“What have I learned from Gene Lewis?” Brown asks. “That in order to contribute to society, you have to be active in helping our youth. Gene Lewis’ life is a lesson to us all.”

The interview is winding down, and Gene Lewis interrupts me to point out two youngsters talking. “See those two boys over there at the punching bag?” Both are in their early teens, one Hispanic, the other white.

“You asked me earlier today why I keep coming back to this gym,” Lewis continues. “Well, this is those two boys’ first day here in the gym. They’ve never met each other before today, and now they’re taking like old friends. They probably go to the same school. I guess that’s my answer.” 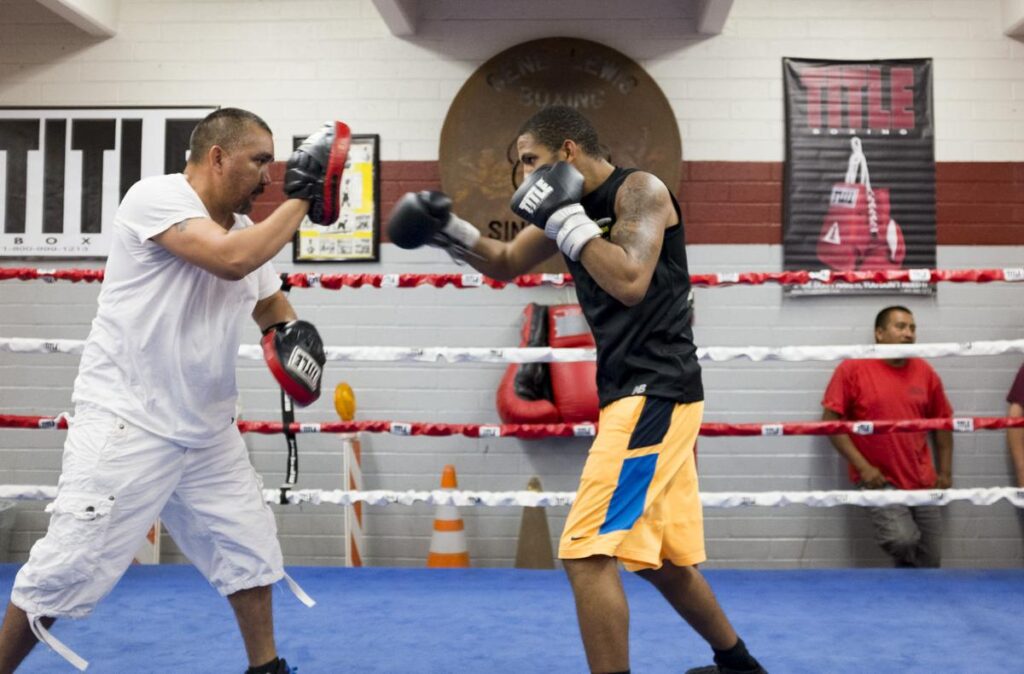 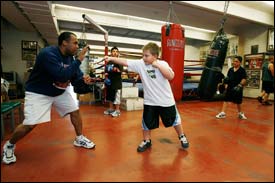 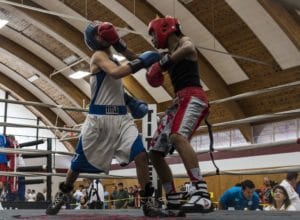 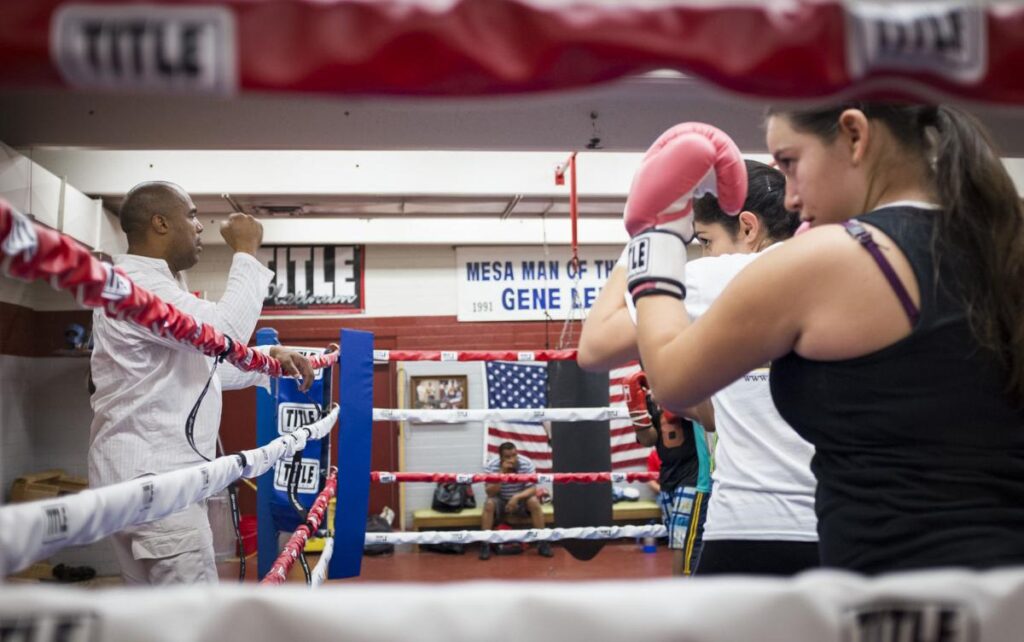